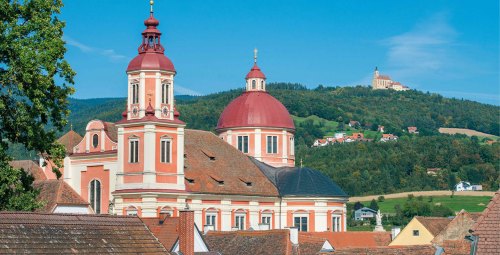 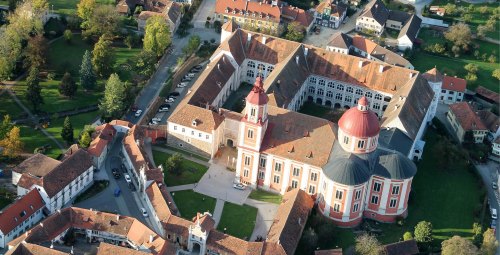 
This castle and former Augustinian monastery is located In the middle of the town of Pöllau. In 1482 Hans Neuberg, the owner of both the castle and the town at the time, stipulated in his will that the castle be converted to an Augustinian monastery on his death . Pöllau Abbey was finally founded 22 years later. In the same year, eight canons under Provost Ulrich moved there from Vorau Abbey. Between 1677 and 1779, the monastery was rennovated and expanded. The floor plan of the church and its mighty dome were modeled after the Basilica of St. Peter in Rome, and so the church came to be known popularly  as "Styria's St. Peter's Cathedral".

Traces remain.
Pöllau Abbey was already disbanded only six years after completion of construction as a consequence of Joseph II's religious reform. The monastery complex became the property of the state. Nonetheless, the nearly 300 year's the canons live and worked in Pöllau left an indelible mark on the Pöllau valley, and Pöllau remained its spiritual, cultural and economic center even after the dissolution of the monastery. Today, the castle is owned by the market town of Pöllau. The parish church and the east wing belong to the diocese of Graz-Seckau. The castle houses event space, including a large and a small "fresco hall", refectory, seminar and exhibition rooms, the Pöllau-Vorau-Joglland Music School, the rehearsal rooms of the renowned Pöllau Marching Band, the tourist office and much more. 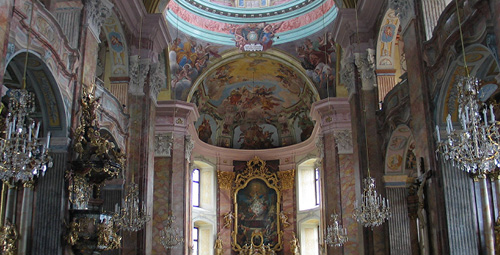 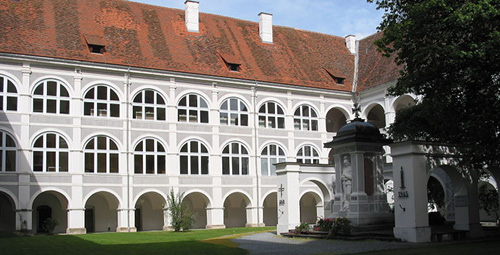 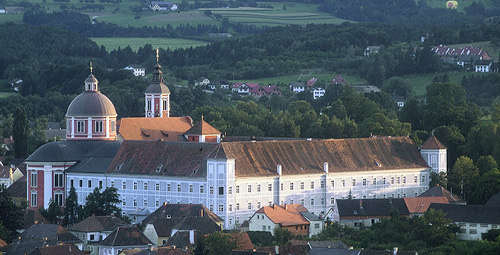 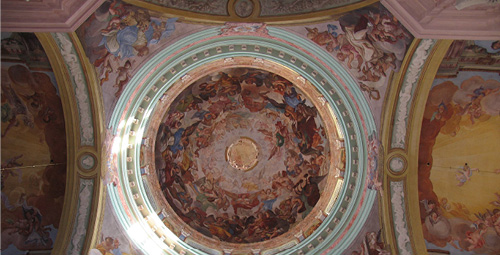 The former Abbey Church in Pöllau, which is known as "Styria's St. Peter's cathedral", is one of the largest baroque churches in the province.
Guided tours may be booked by contacting the tourist office.
T: +43 3335/4210

PÖLLAU CASTLE TOUR
Content: Come on a journey into the past . During a guided tour of the castle, a lot can be learned about the history of the former Pöllau Abbey and its Augustinian Canons. Visit the Large Fresco Hall, the former monastery library with its wonderful frescos, and the refectory in Pöllau Castle. The tour continues into the fantastic arcaded castle courtyard with the Soldiers' Memorial. You will visit the Pöllau parish church and the attached sacristy.   The tour ends in the castle park, which was used as the abbey garden when the canons lived here.
Tours for individuals
Group size:minimum of six
Duration: 1 hour
Price: € 6 per person
Reservations required by calling the Tourism Office at +43(0)335/4210
Dates: year round by appointment

Group tours
Group size:minimum of eight, for the maximum number, contact the Tourism Office
Meeting point: in front of the Tourism Office in Pöllau
Duration: 1 hour
Reservations required by calling the Tourism Office at +43(0)335/4210
Dates: year round by appointment
Price: for groups of up to 15 person a flat rate of €45, and €3 for each additional person

Tip: longer tours can also be arranged. Length and costs are available on request (.e.g. a 90-minute tour for a group of up to 15 for a flat rate of €67.50 and €3 for each additional person)
Program for children & school pupils
GUIDED TOUR OF THE PÖLLAU PARISH CHURCH

Content: On a tour through the former Augustinian monastery, you can learn a great deal about the history of the Pöllau parish church. Owing to its size and layout, this baroque church is often referred to as Styria's St. Peter's Cathedral. The walls of the previous moated castle, which provided the foundation for the monastery building, can also be discovered.

Duration: 1 hour
Price: €2.50 per pupil
Meeting point: main entrance of the parish church Pöllau
With the GenussCard, this tour is free!

HISTORICAL RALLY - PÖLLAU
Content: Follow the footsteps of our ancestors. On this rally you will visit interesting points in the market town of Pöllau. It is very important to have a keen eye, pay attention to hints and to read instructions carefully. The rally introduces you can get to the historical development of Pöllau.
Duration: 1.5 hours
Price: €3.50 per pupilt
Meeting point: main entrance of the parish church Pöllau

Content: Guided tour of the historical market, parks & parish church of Pöllau. The historical view of Pöllau is not only influenced by the imposing  former Augustinian monastery building and the attached church. In a tour through the town center, the town's secular history comes to life through an impressive architectural record. Old artisanship, the work of the Augustinian canons outside the monastery walls and a centuries-old system of rule have left their mark everywhere in the village.  Beautiful parks such as the castle park and Aupark are also visited on this tour. The castle park also houses an outdoor classroom and the first Styrian root show garden.
Duration: 3 hours
Price: €7.50 per pupil
Meeting point: main entrance of the parish church Pöllau

EXHIBITION ECHOPHYSICS - EUROPEAN CENTER FOR THE HISTORY OF PHYSICS
Content: Echophysics "Radiation - Humans Exposed" shows the minds and devices that brought us our knowledge about radiation. The exhibition shows in text and pictures the development of modern physics. The collection includes more than 600 instruments, photos, films and documents, including all of the original measuring instruments of the Vienna Institute for Radium Research and Styrian Nobel Laureate for Physics, Victor Franz Hess.
Duration: 1 hour
Price: Admission €1.50 per pupil
Surcharge a guided tour: € 1.00 per pupil
Meeting point: Pöllau Castle
Dates: April to November, Thu. to Sun., 10 am to 5 pm or by appointment
Reservations: required for guided tours at Tel: +43 (0) 664/88 615 896
With the GenussCard, admission is free!
Contact & Info
Tourism Association of the Pöllau Valley Nature Park
8225 Pöllau bei Hartberg, Schloss 1
Phone: +43 (0)3335-42 10
Fax: +43 (0)3335-42 35
info@naturpark-poellauertal.at
www.naturpark-poellauertal.at


Office hours:
Monday to Friday from 9am - 4pm