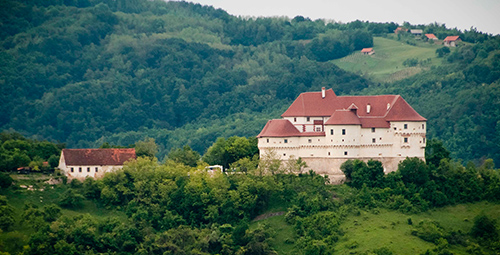 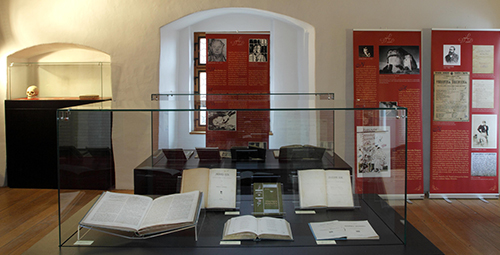 The late-mediaeval castle of Veliki Tabor is located on the top of a hill, 333 meters above sea level, in the village of Kośnicki Hum, three kilometres from Desinic. Recognizable for its fairytale-like appearance and the lush, monumental architecture, it has been declared a monument  of the highest category. It is one of the best preserved late-medieval castles in continental Croatia, preserved almost in its original form. For over half a millennium, it has dominated the hill from which beautiful views of a large part of Hrvatsko Zagorje and neighbouring Slovenia can be enjoyed. The view of Veliki Tabor from the surrounding area is also imressive, especially from the Horvatska rivulet valley, with the fort standing as a landmark that can be seen from afar.
The construction of the castle was probably initiated by the aristocratic family of Celjski in the middle of the 15th century, when the oldest part of Veliki Tabor was built - the late Gothic pentagonal tower. At the beginning of the 16th century, the castle became the property of the Rattkay noble family, who completed its construction and lived in it until the end of the 18th century. After the Rattkay family died out, the castle changed hands several times in the course of the 19th and the 20th centuries. It was frequently used for inappropriate purposes — in the 20th century it was used as a prison, a housewifery school, an orphanage, a meat smokery, and a warehouse for the Desinic Agricultural Cooperative, becoming increasingly dilapidated in the process. In the period between the two world wars (1919—1938) it was owned by the famous Croatian painter, Oton Ivekovic, who found boundless inspiration in the picturesque castle and the surrounding landscape. In 1993 it was made part of the Museums of Hrvatsko Zagolje, which soon launched comprehensive archaeological research and oversaw the restoration of Veliki Tabor under the guidance of the Croatian Conservation Institute in Zagreb.
The Legend of Veronika of Desinic 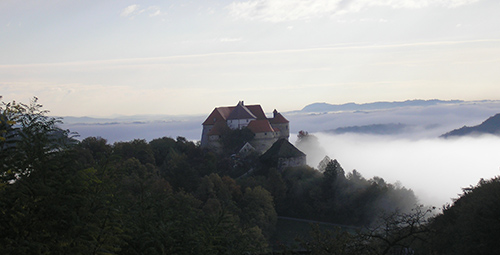 In addition to its specific architecture and appearance, Veliki Tabor is known for a number of legends and stories. The best known is the orally transmitted story about Veronika of Desinic (Veronika Desinicka), which has been entered into the Cultural Heritage Register of the Republic of Croatia. The story of a noblewoman who paid with her life for her great, but forbidden love for the aristocrat, Fridrik of Ceje (Fridrik Cejski) was passed down from generation to generation and preserved to this day. The sad but intriguing story has captivated the imagination of the many visitors to Veliki Tabor, who come in hope of resolving the mystery of the wall somewhere behind whose bricks — as the story tells us — lies Veronika’s body.
Contact & Info
Veliki Tabor Castle
HR-49216 Desinic, Košnički Hum 1
Phone: +385 49 374970
or +385 49 374973
dvt@mhz.hr
www.veliki-tabor.hr